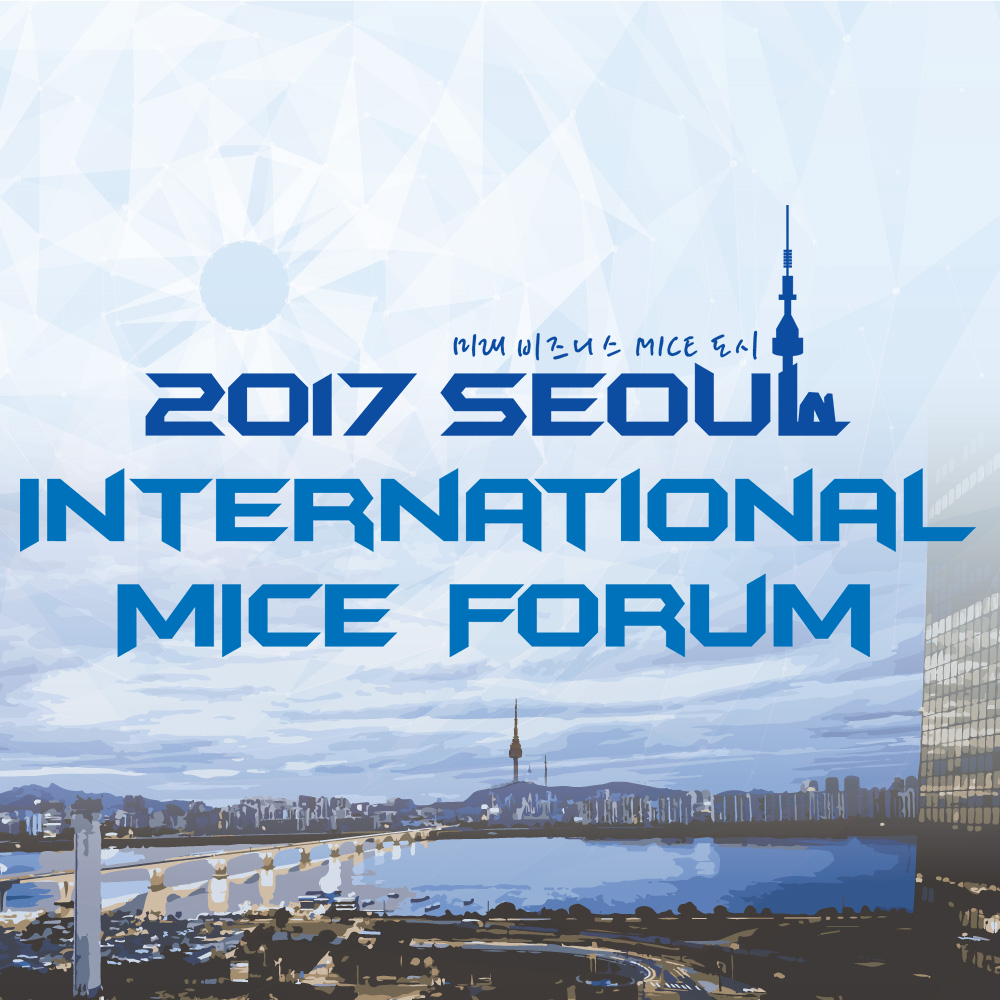 Posted at 15:20h in Uncategorized by Dayoong Kim

Over 300 participants of both domestic and foreign MICE professionals 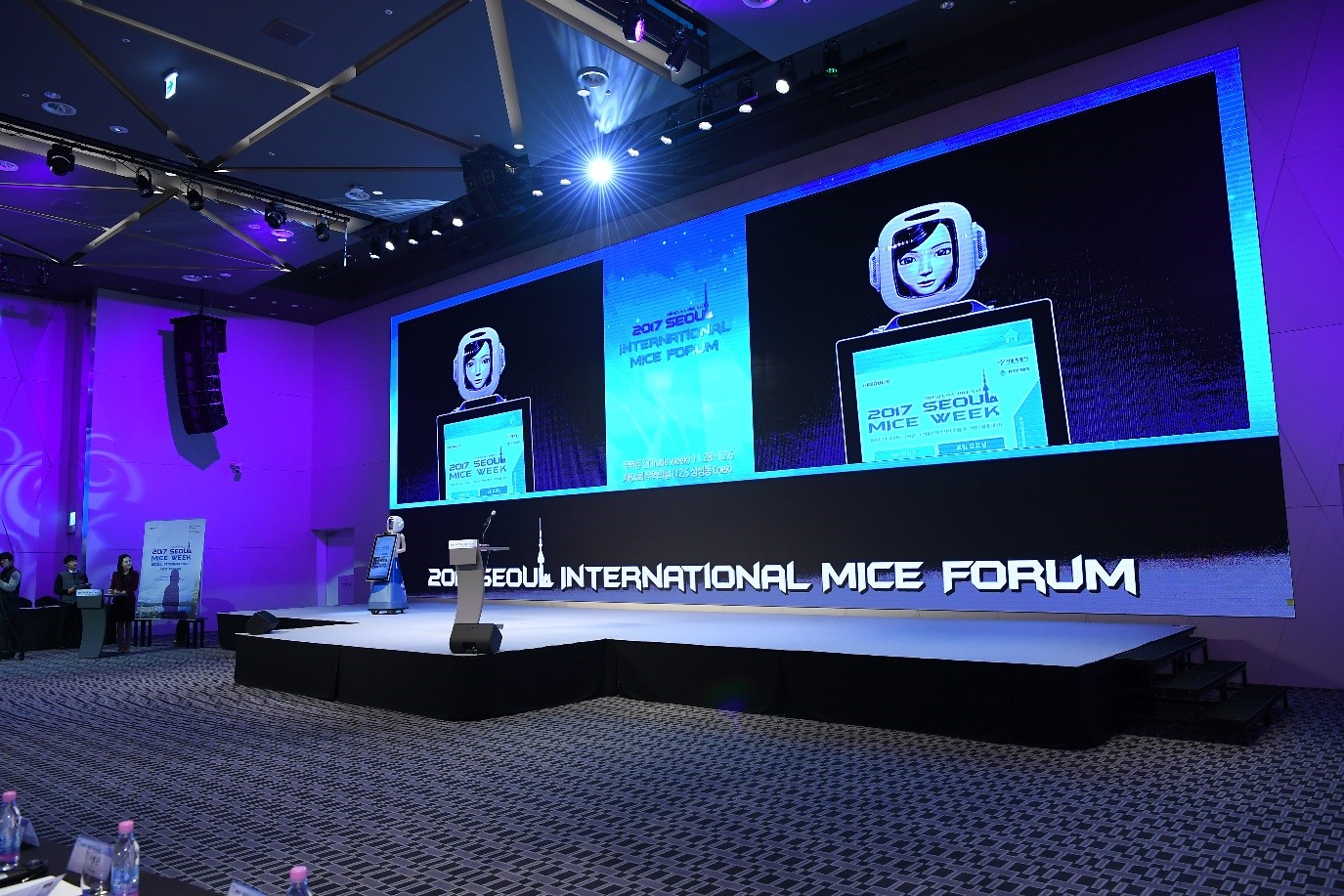 The 2017 Seoul International MICE Forum was held at the grand ballroom of Seoul Dragon City on November 24 to discuss the developmental direction of the future MICE industry. Co-hosted by the Korea International Trade Association and Seoul city in celebration of the 54th Trade Day, the forum was a great success that was attended by roughly 300 domestic and foreign MICE professionals. The event featured presentations from experts regarding measures to vitalize the future MICE industry and present the latest trends in MICE, followed by an introduction of Seoul city’s future vision to become the world’s best MICE business city. 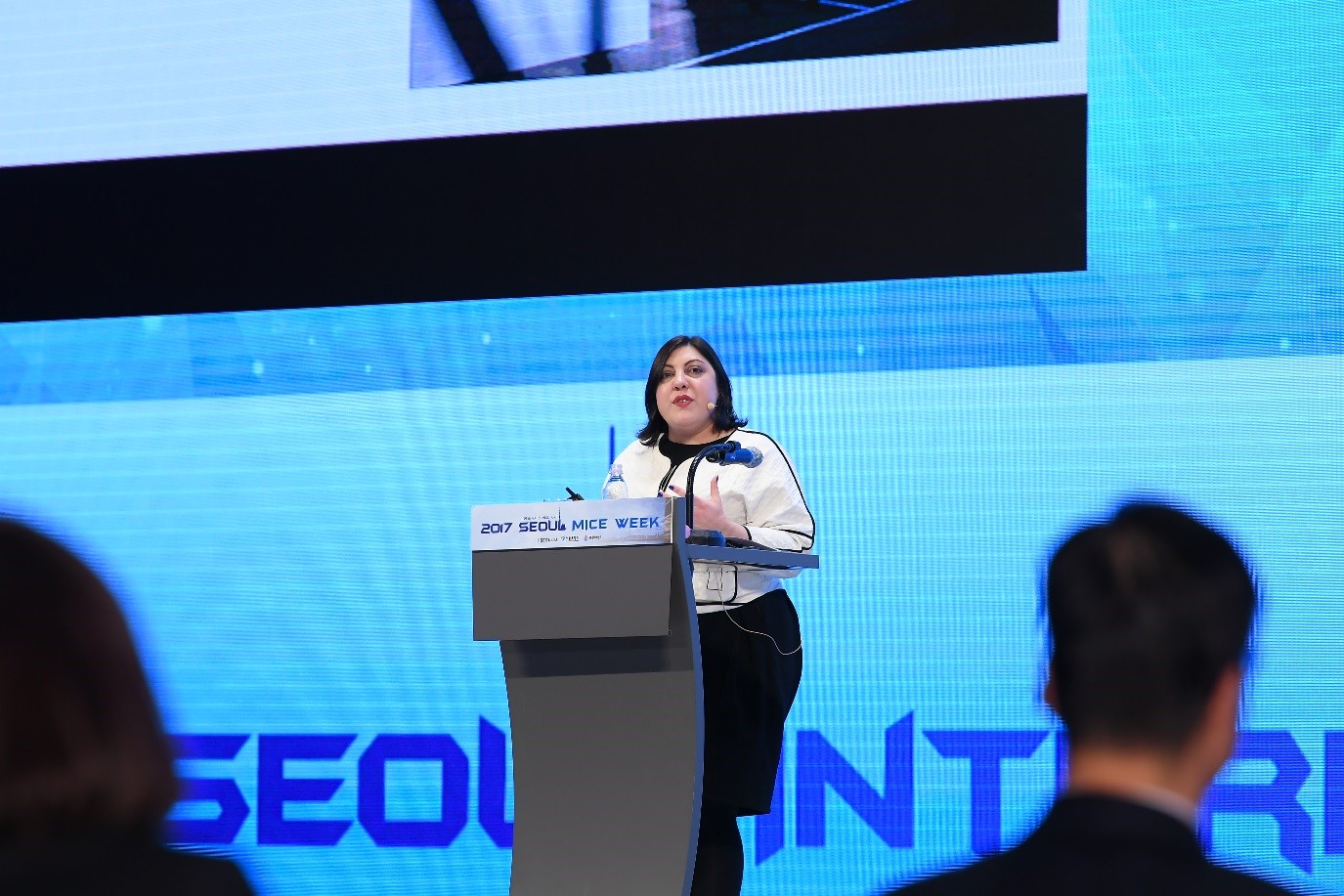 This year’s keynote address focused on how the future of MICE lies in the knowledge service industry that lead the convergence trends of future industries. Jodie Eastwood, keynote speaker and CEO of Knowledge Quarter London, commented on the role of the MICE industry in driving the convergence trends of future industries: “The MICE industry’s influence will grow in the future through the sharing of knowledge from different industrial fields, and as MICE industries provide more opportunities for collaboration and innovation, the city’s competitive edge will grow.” 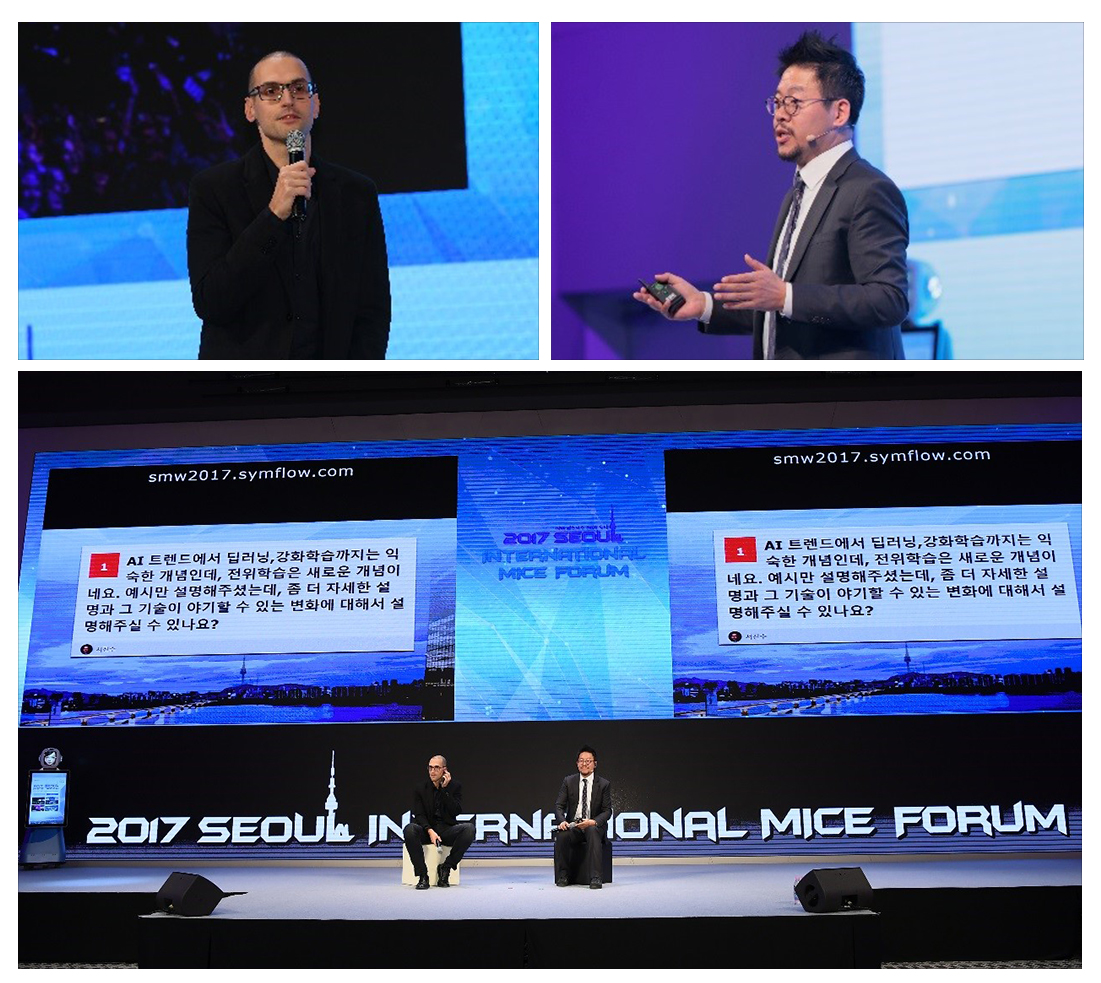 The topic for the session 1 that followed after was “Newest Trends in Hybrid MICE.” presented by Julius Solaris of Event MB, a specialized company that consults with and acts as an incubator for startups in the MICE field, presented on the newest trends in Hybrid MICE. Solaris spoke about conducting digital site visits through the use of virtual reality (VR) technology and using artificial intelligent hotel concierge robots. He explained, “There is an increase in Hybrid MICE, a new type of combining events with actual offline sites through virtual space display with ICT. In 2018, a trend such as this will be more common.”

Seo Jinsoo, the concierge software specialist in Big Data, presented the ‘Value-based Mei Trends in the Age of the Fourth Industrial Revolution’. “In the era of the Fourth Industrial Revolution, Seo said,” We must actively utilize the latest technologies such as artificial intelligence, robots, and speech recognition technology for the development of the MICE industry. “As technology advances, We can achieve bigger growth. “

Seo Jin Soo, big data specialist and CEO of Concierge Soft, presented the ‘Value-based MICE trends in the Fourth Industrial Revolution’. Seo Jin Soo commented “Now that we’re in the Fourth Industrial Revolution, we must actively utilize the latest technology such as artificial intelligence, robots, and voice recognition technology for the development of the MICE industry. As technology advances, changes in our existing ways of thinking will occur where we can achieve bigger growth.” 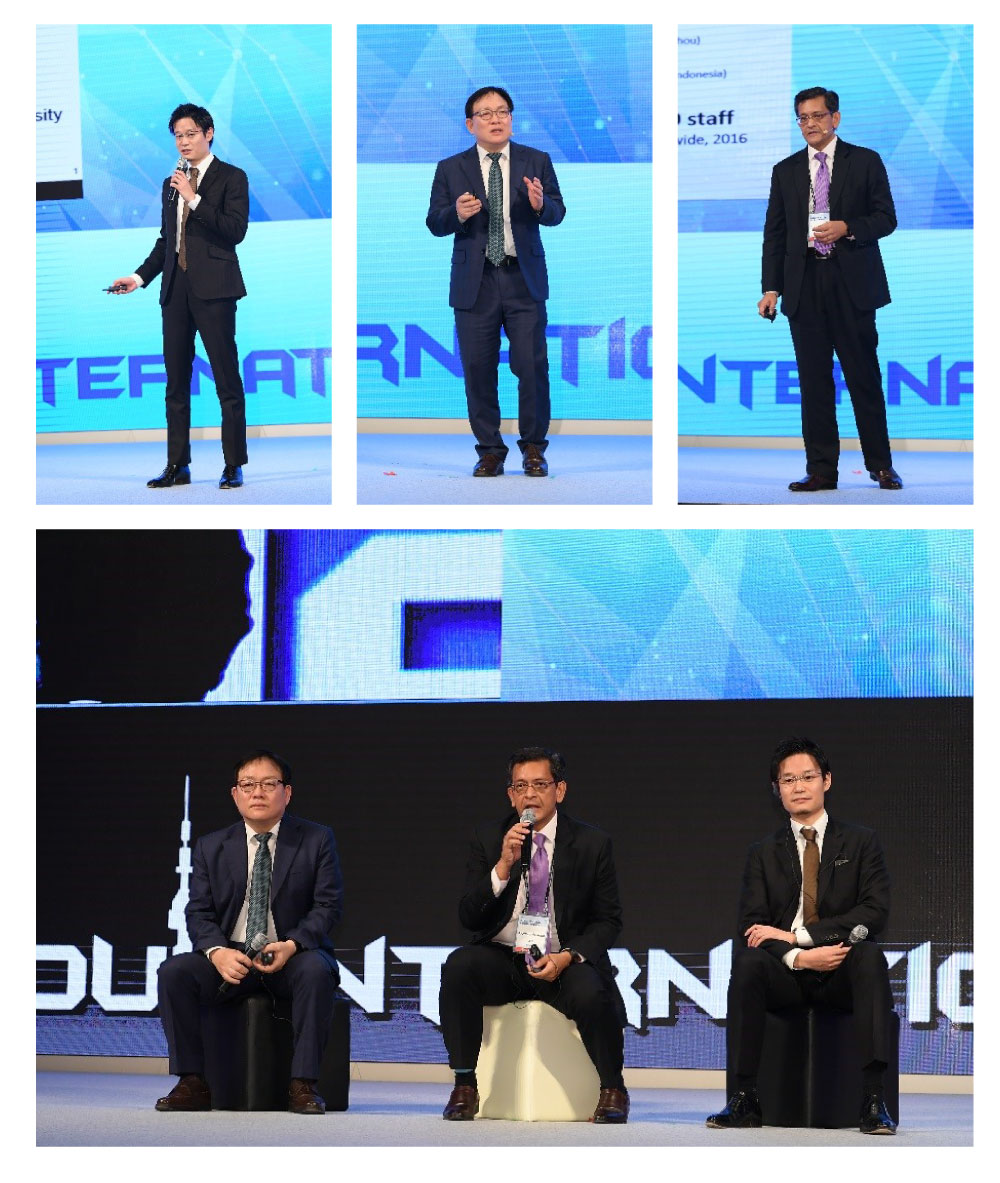 The topic of session 2 “See the Future of Seoul through Examining Infrastructure Trends in Global MICE Cities.” presented by President Aloysius Arlando of the Association Internationale des Palais de Congres (AIPC), introduced the developmental and operational trends for overseas MICE infrastructures by taking Singapore as an example – a country that is currently attracting eight million tourists. He said, “As the competition within the MICE industry intensifies, we must achieve a combination of offering an attractive tourist destination, a safe transportation network, a professional labor force, and support services in order to maintain our competitive advantage.”

The second speaker, Mr. Atsushi Okamura, MICE, Nomura Research Institute, Japan, presented the ‘case studies and implications for the development of overseas advanced MICE infrastructure’. Mr. Okamura, an example of the development of a complex MICE facility in Sydney’s Darling Harbor and the Japan Coastal Sub-district, said, “The Tokyo Big Sight has a contractual incentive of 30 trillion won a year.” In Seoul, It is necessary to expand the MICE complex to build a future new industry power infrastructure. ”

The second speaker of the session, MICE team leader Mr. Atsushi Okamura of the Nomura Research Institute of Japan, presented ‘case studies and implications for the development of advanced overseas MICE infrastructures’. Mr. Okamura provided examples of developments made to the MICE facility of Sydney’s Darling Harbour and the Japan coastal sub-district. He said, “In the case of the Tokyo International Exhibition Center, its contract inducing effect is valued at 30 trillion KRW per year”. “It is necessary for Seoul to expand its MICE complexes to strengthen the city’s competitiveness and to build infrastructures for future new industries.”

The final speaker of the session was professor Kim Chul-won of Kyung Hee University’s Hospitality and Tourism Management program, who spoke about the latest trends in Hybrid MICE. “To prepare for the Fourth Industrial Revolution and take the role of an incubator of new creative ideas, integrated MICE facilities are needed. The plans for constructing the MICE facility in Jamsil that are currently being pushed ahead could become a new milestone for Korea’s MICE industry. As such, a great deal of cooperation and interest will be needed from the concerned parties,” said professor Kim.