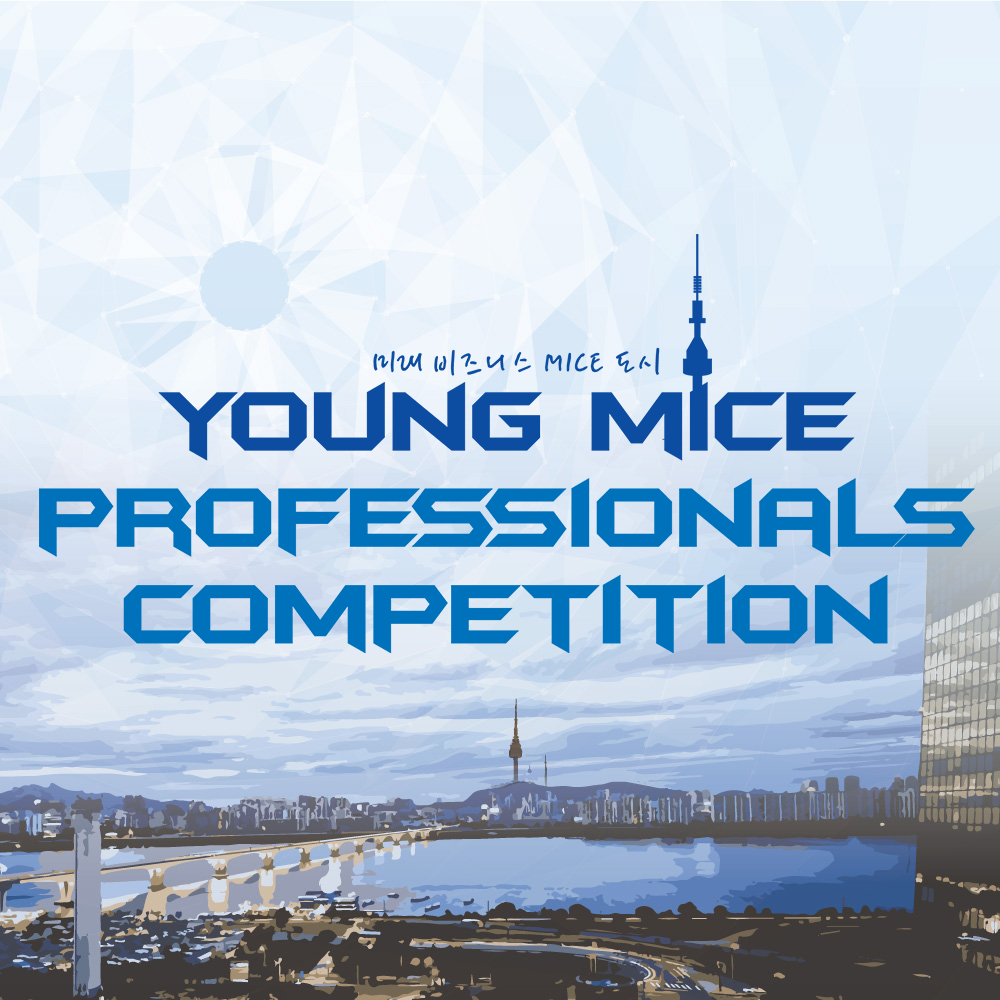 Posted at 15:02h in Uncategorized by Dayoong Kim

“We will lead the future of Seoul MICE!”

An event to promote the sustainable growth of future MICE industries 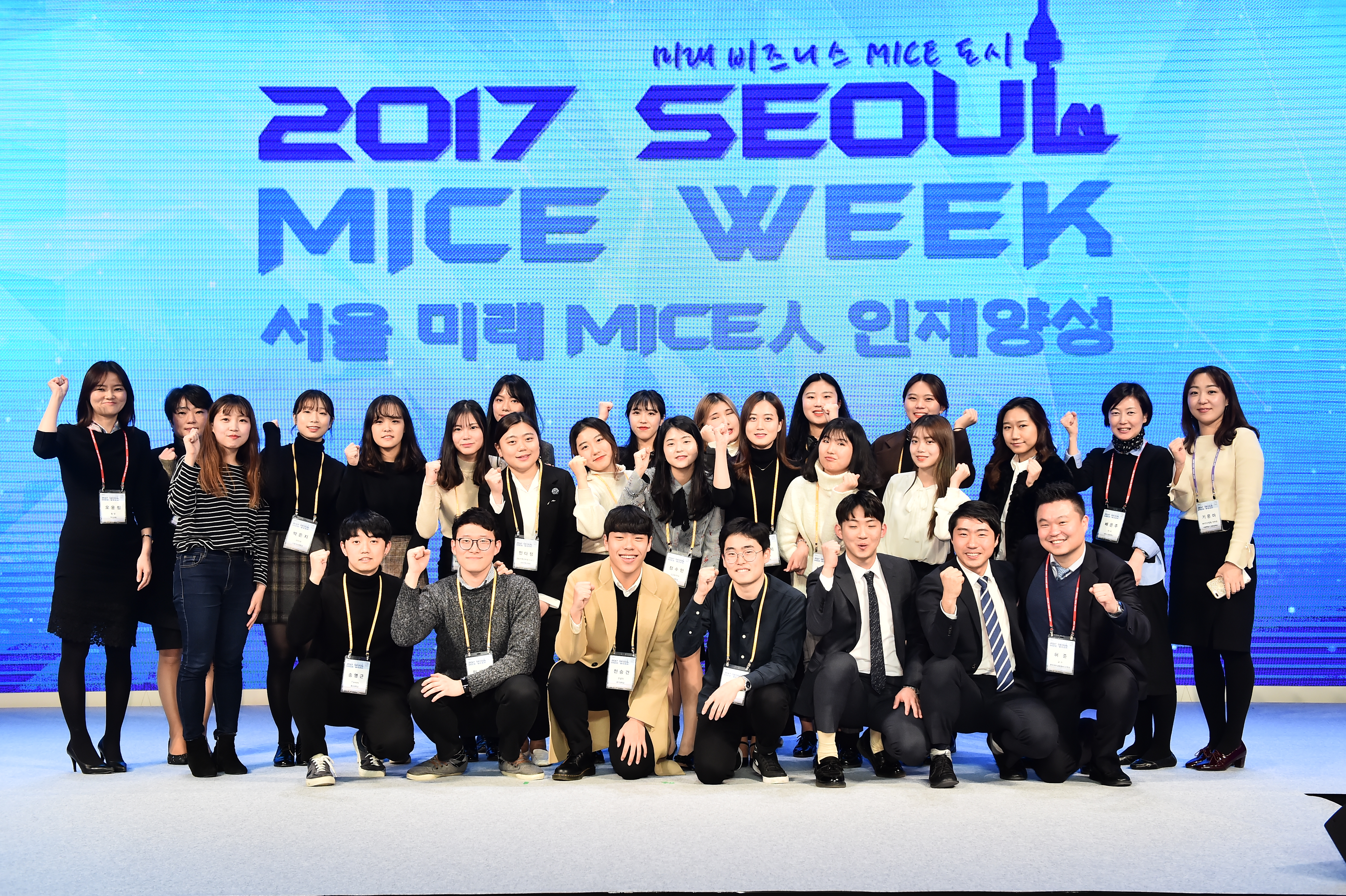 Seoul’s young generation has shaken the MICE landscape. More than 150 people including high school and university students nationwide who dream of working in the MICE industry participated in the “Young MICE Professionals Competition,” held in Seoul Dragon City on the first day of the 2017 Seoul MICE Week (November 23-24). The program featured lectures from guest speakers, a competitive exhibition of future MICE talents, a briefing session for MICE Seoul’s enterprises for cultivating professionals, and a certificate of recognition from the mayor of Seoul was given to outstanding supporters and the MICE mentor group. The program offered a chance for young people to enthusiastically share their fresh ideas, and a chance to look back at Seoul city’s MICE talents cultivation efforts over the course of this year.

The lectures that were scheduled for the event drew a great deal of interest. With a theme of personal branding and cultural planning, the lectures provided a channel for young people to release their concerns. Hwang Bu-young, CEO of Brandigm & Partners and brand marketing expert, emphasized that the core of a person’s brand lies in their “experiences and relationships.”

“Leave an imprint of yourself upon the people you meet. To do that, you have to raise your self-esteem, set your life goals, and find your own strengths. Whether it be competence, sophistication, tenacity, passion, or sincerity, make sure to make at least one of them your strength.”

The second guest speaker was Song In-hyuk, Co-CEO/curator of Life Square. Song Inyuk – who has worked previously on an episode of 15 Minutes to Change the World – introduced a landmark program that he had designed himself and gave the following piece of advice. “In this day and age where there is an overabundance of options, you have to stand out to be noticed. Use unknown methods to come in contact with unknown worlds.”

The highlight of the event was the MICE Idea Contest. A total of 58 teams applied for the preliminaries, with 12 of those teams (5 high school teams, 7 university teams) making it to the final round after going through a mentoring session with a MICE expert. The participants went on stage to enthusiastically introduce their ideas. They presented fresh and original MICE tour products that showed the charms of Seoul, and even suggested some ideas for MICE events they came up with by themselves. 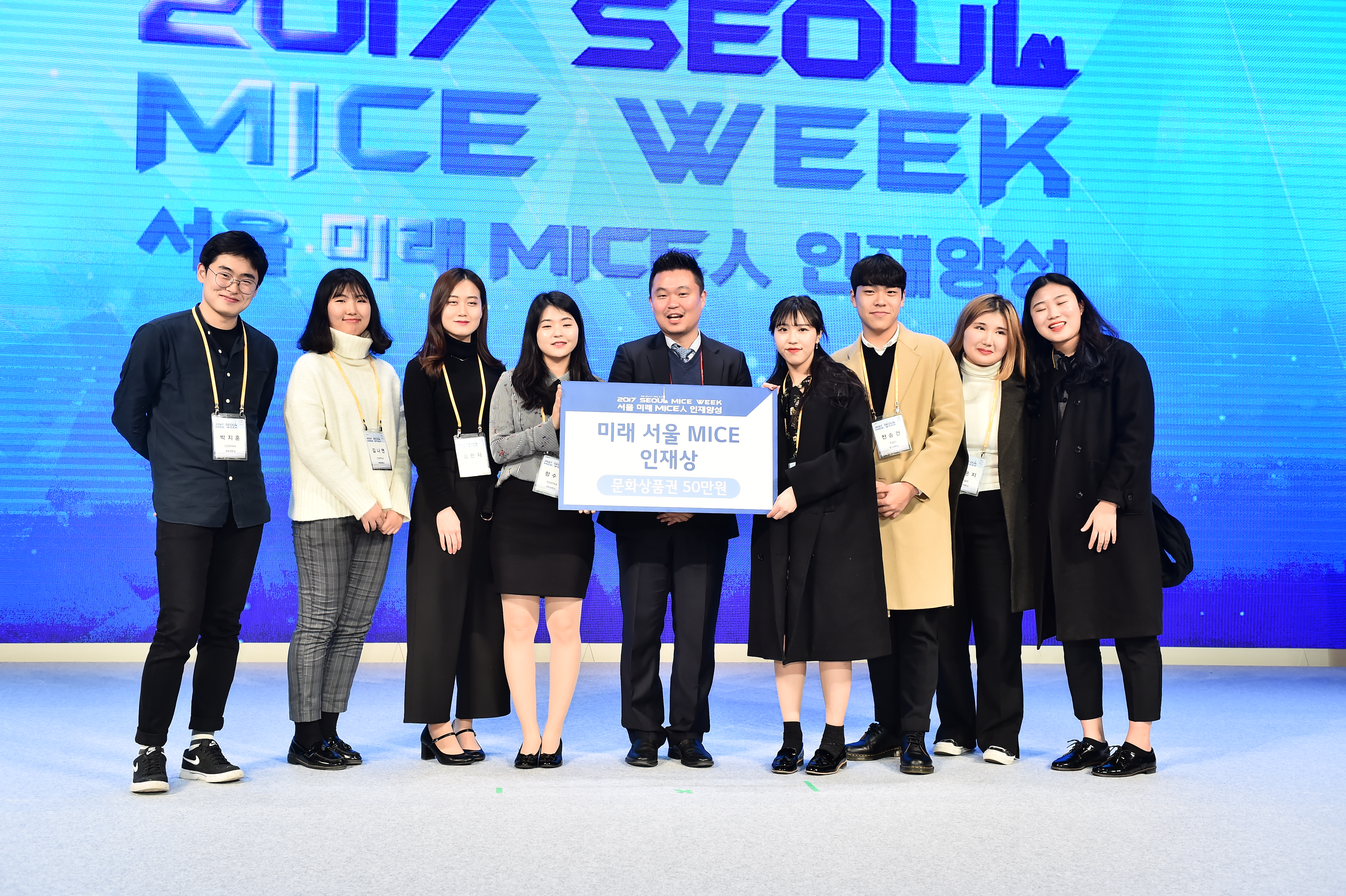 A total of five teams were honored with awards. The “Future of Seoul MICE” award went to teams such as Earth and Us (Haesung International Convention High School), Korshala (Kyonggi University), and Contra (Kyung Hee University). The winning teams were presented with a Seoul Mayor’s Award and a gift voucher worth 500,000 KRW. In regards to Earth and Us’s “2018 Save the Earth Expo” presentation, judges commented that “the presentation was so solid that it was hard to believe it was conducted by high school students.” The presentations were meant to raise the awareness of Seoul as an environmental-friendly city.

Team Contra was praised for its idea of linking emoticon products with the character industry for an event called “Korean International Emoticon Fair (KIEF),” while team Korshala proposed a Korean cultural experience tour for Muslim MICE visitors, which they called “Koslamic.” Team Korshala was presented with two awards of the “SNS Support” for their original ideas, such as doing a five-colored turban dyeing experience with tour participants. 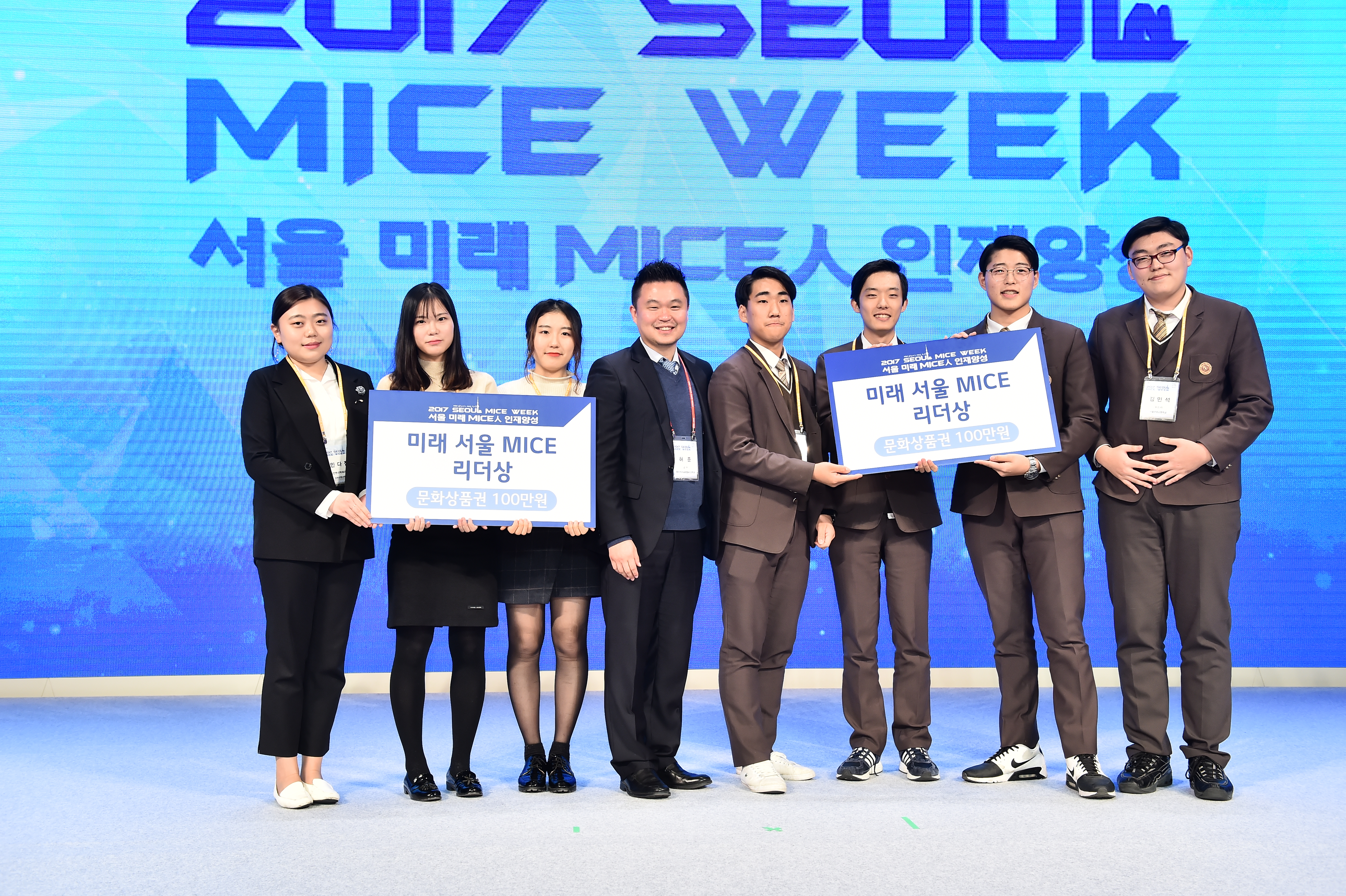 Professor Heo Jun, Dongduk Women’s University’s global MICE studies professor and judge said, “Thanks to the high-level unique ideas that were armed by the teams, the evaluation process made the judging both enjoyable and difficult. I am proud, regardless of who won or who did not, to have been able to witness the bright future of the Seoul MICE industry.” Team Contra member Kim Na-yeon, who won the “Future of Seoul MICE” award smiled brightly as she said, “Now that I’ve received this award, I’d like to challenge the MICE tourism industry through marketing activities in the field.” 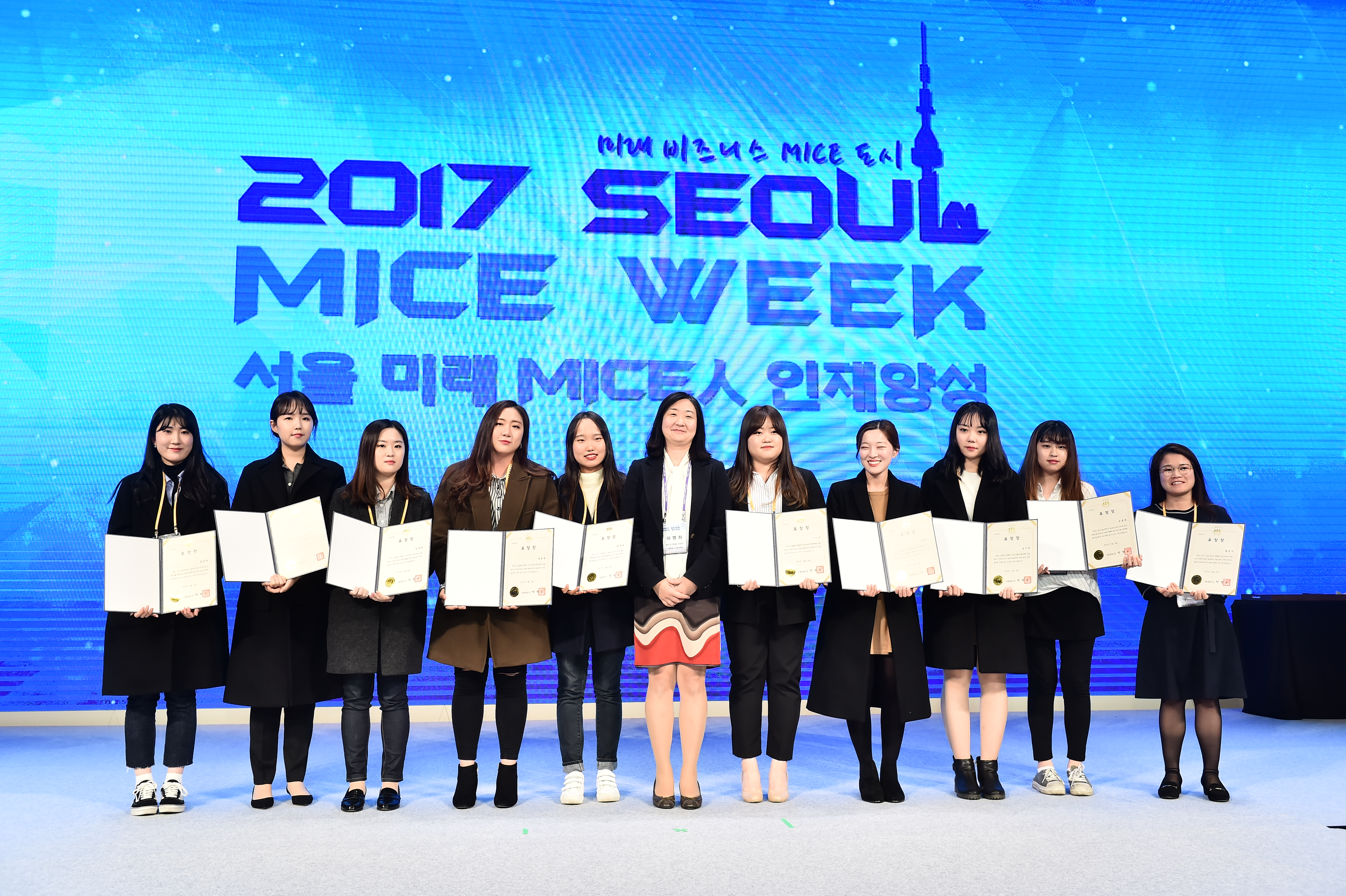 On the same day, the city of Seoul and the Seoul Tourism Organization (STO) had a chance to review the MICE talent cultivation efforts from 2017. Over the past year, STO has ran programs such as Seoul MICE Supporters, MICE Human Resources Bank, and the Young MICE Promotions Unit to assist the younger generation in familiarizing themselves with the MICE industry. STO has also helped these young talents to grow into professionals. Through the nine MICE educational sessions that took place over the past year, 746 Seoul MICE supporters were trained, and approximately 900 supporters were sent to assist more than 90 MICE events that were being held in Seoul. A certificate of recognition from the mayor of Seoul was awarded to six Seoul MICE Supporters, one from the MICE Human Resources Bank, three members of the Young MICE Promotions Unit, and three mentors who led the Human Resources Bank that showed sincerity in their work.