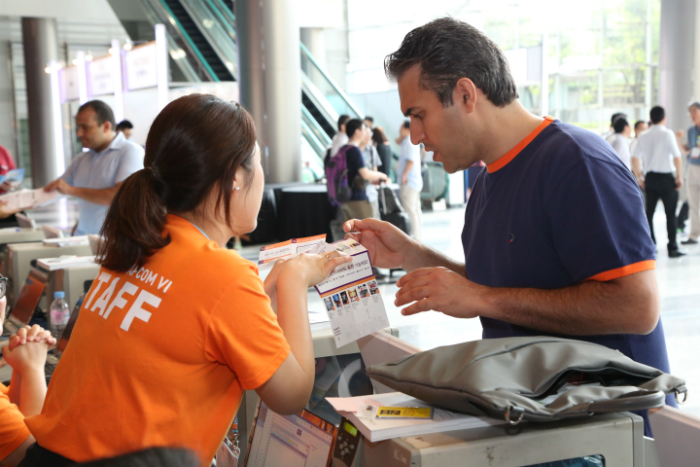 Posted at 20:02h in Uncategorized by Jiyeon Lee

David, an American attendee of the recently held World Congress on Computational Mechanics in Seoul, quickly became a fan of the MICE card he received from the event organizers after trying it out. Mentioning that the MICE card reconfirmed Korea’s position as an IT powerhouse he added that the card made his visit easier as he did not have to walk around to find a WiFi spot.

After trying it out, he summarized the benefits the MICE card as such:

① It is pretty.
I thought it was just a pretty souvenir. The cute, Korean-looking design makes it worth keeping as a souvenir. If I could buy this back home, I would have bought it for my friends who travel to Korea.

③ It is rechargeable
It is economical because you can conveniently recharge the card. Recharging stations can be easily found at subway stations, convenience stores, or even street vendors.

④ It can be used in lieu of cash
You can pay with a MICE card at most convenience stores, coffee shops, and many other stores. Carrying cash or credit cards when traveling overseas can be inconvenient, so loading this card with value and using it in stores and on the subway is very convenient.

⑤ Wifi
The WiFi feature of the card was something truly special. Although the communication infrastructure of Seoul is perhaps one of the best in the world, you still have to pay fees and rent a WiFi device. The fact that the MICE card has a WiFi PIN number on it really shows Seoul’s thoughtfulness for foreigners. If I knew about the MICE card, I wouldn’t have rented a portable WiFi egg at the airport.

The Seoul Metropolitan Government provides MICE cards to international conventions that are held for over six days in Seoul with over 1,500 attendees. It handed out the upgraded MICE cards with WiFi PIN numbers for the first time as a trial run at the 12th World Congress on Computational Mechanics held in July this year.

※ This article was written based on the reviews by foreigners who used the MICE card in Korea.