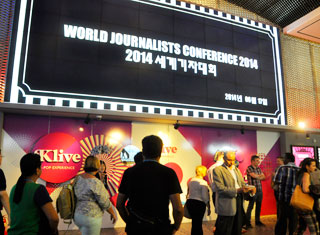 Posted at 19:01h in Uncategorized by Dayoong Kim

[dropcap]S[/dropcap]eoul recently played a lead role in encouraging talks on the ways in which journalists can help to achieve peaceful reunification between the two Koreas at the 2nd World Journalists Conference (WJC 2014), held from June 15-20 at the Seoul Foreign Press Center and Hotel President Seoul. Attended by 75 journalists from 49 countries, the week-long event also included an opportunity to explore both traditional and modern Korean culture at a number of popular Seoul attractions and entertainment venues.

Under the theme, ‘Peaceful Reunification of the Korean Peninsula and Global Journalism’, WJC attendees explored ways of positively promoting reunification, improving inter-Korean relations, promoting the Korean brand overseas, and evaluating the roles of traditional media in the modern world. Key discussions were held on June 16th and included a welcome dinner hosted by Mayor of Seoul Park Won-soon.

A city tour of Seoul followed a trip to the Korean Demilitarized Zone on June 17th; the latter designed to take the visitors on a journey spanning both Korea’s ancient and ultramodern culture in the space of a single afternoon. This included a luncheon at Bukchon Myeonok, a traditional Korean restaurant in the city center, wherein meat-free dishes were provided to accommodate vegetarian guests. There then followed a guided visit to Changdeokgung, one of Seoul’s royal palaces and a UNESCO World Heritage Site often seen in popular Korean television dramas and film. Seoul’s contemporary side meanwhile was demonstrated by a trip to Klive, a K-pop performance hall in which pre-recorded concerts from such famous artists as Big Bang, 2NE1, and PSY, are enhanced by 3D holography.

“Seoul surprises me as a cosmopolitan city that at the same time keeps a deep relation with tradition,” enthused attending Portugual-based journalist and Deputy Editor in Chief of Diario  de Noticias Leonidio Ferreira, adding, “Your tour was a confirmation of this feeling.”

Financial support was provided by the Seoul Metropolitan Government, which was facilitated along with operational support for the city tour by the Seoul Convention Bureau. Learn more about the many Seoul Convention Bureau services and support available to event planners by visiting www.miceseoul.com or emailing mice@seoulwelcome.com. Readers can also find many other Seoul-based attractions suitable for themed city tours and post-meetings entertainment by logging on to VisitSeoul.