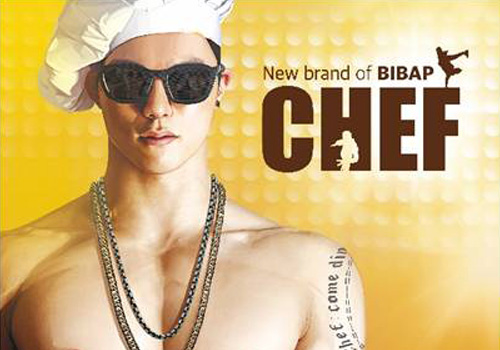 Posted at 20:51h in Uncategorized by Dayoong Kim

The musical CHEF(New brand of BIBAP) which is already proven in 85 cities in 20 countries hits the world starting with splendid visual treat and newness!

Non-verbal performance musical BIBAP, loved by home and abroad, is rebirth as the name CHEF(New brand of BIBAP). Moreover, the storyline and music are also upgraded as a dynamic performance to catch the eyes and ears of the audiences.

There is only one reason to change BIBAP into CHEF! If the performance is standing without changing, the audiences would leave. Actually, ‘BIBAP’ has been proceeded three times modification of stage set, five times of costumes change, and six times upgrade of programs since the premiere in 2011, that is different with existed non-verbal musical which is usually an open run! It shows a will of crew through performance upgrade that they want to show their best every moment to meet the audience. In addition, there is special behind story of CHEF’s rebirth.

The musical ‘BIBAP’ attended to Edinburgh Festival, the world best performing art festival, in last August. Choi Chulki, as a general director and attended four times in Edinburgh Festival with various performance such as NANTA, JUMP, BIBAP, decided to change ‘BIBAP’’s name into ‘CHEF’ because ‘BIBAP’ is difficult pronunciation to foreigners and the name ‘CHEF’ might express its overall performance style well. The general director Choi’s prediction was right. During the street performance for a public relation, the performance was promoted with the name ‘CHEF’ instead of ‘BIBAP’ and many people began to chant ‘CHEF’. Moreover, people who lost their heart to interesting story started to spread the word that led sold-out result and local famous newspaper companies such as The scotsman, Metro gave ‘CHEF’ the highest grade with five stars. As the result, it received the best comedy award in The Asian Arts Awards, that innovate performance team with remarkable art performance is received.

The musical ‘CHEF’ received the grand prize in 2014 Korea Wave Award and has been performed in 85 cities in 20 countries and showed sellout in Ciputra theater(1,194 seats) in Jakarta, Indonesia last year. In addition, during the Japan tour starting from sellout of Tokyo Nakano Sun Plaza(2,222 seats) performance, the buying rate appeared highly over 90% in seven cities. As the exceptional result, KBS 9 New reported it. Instead of dwelling on the result, CHEF(New brand of BIBAP) is upgrading more splendid visual performance and newness and it is currently established performance in Macao, Singapore, Japan, Taiwan, and Indonesia. Persona, the production and distribution company, is devoting all its energy that many people in the world can enjoy CHEF.

The musical ‘CHEF(New brand of BIBAP)’ has its permanent theater in Jongro2-ga and is performed at 20 o’clock on Monday, at 17 o’clock and at 20 o’clock from Tuesday to Sunday to meet domestic and overseas audiences.