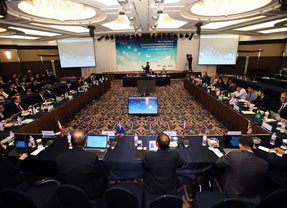 Posted at 08:43h in Uncategorized by Dayoong Kim

[dropcap]T[/dropcap]he 1st Meeting of Aeronautical Communication Services Implementation Coordination Group (ACSICG1) was held recently in Seoul from May 13-16 at the Riviera Hotel Seoul. The event brought together 150 participants from 20 countries to discuss key issues in civil aviation for the Asia-Pacific region, with attendees also given an opportunity to explore local Korean culture during their visit.

During the high-level meeting, participants aimed at moving forward plans to boost ground/ground communications infrastructure in the Asia-Pacific as directed by the International Civil Aviation Organization (ICAO). It also allowed industry experts to discuss the outcome of other meetings held over the past few months on related issues.

A cultural experience tour was conducted on May 15th, which included an opportunity to make traditional Korean kites at the workshop of Lee Gi-tae, a visit to Seoul’s Bukchon Hanok (traditional Korean house) Village, and a theatrical performance of Miso: Baebijang-jeon, based on a satirical novel written during Korea’s Joseon Dynasty. Attendees were also given the chance to explore the recently-opened Dongdaemun Design Plaza, one of the city’s newest unique meeting venues. Lunch meanwhile was Korean barbecue at the Gyeongbokgung restaurant in the Insa-dong neighborhood.

City tour participant Mohammad Zaki Bin Ariffin, of the Civil Aviation Authority of Singapore, exemplified the warm response ACSICG1 visitors expressed over the chance to explore Seoul during the event. Citing Miso as a particular highlight, Bin Ariffin said he was “very fortune to be able to learn the history and culture that makes Korea unique in its own way,” adding “Overall, the experience was great. I must say I need to go there again to get to know more of Seoul, as I only scratched the surface of what Seoul can offer.