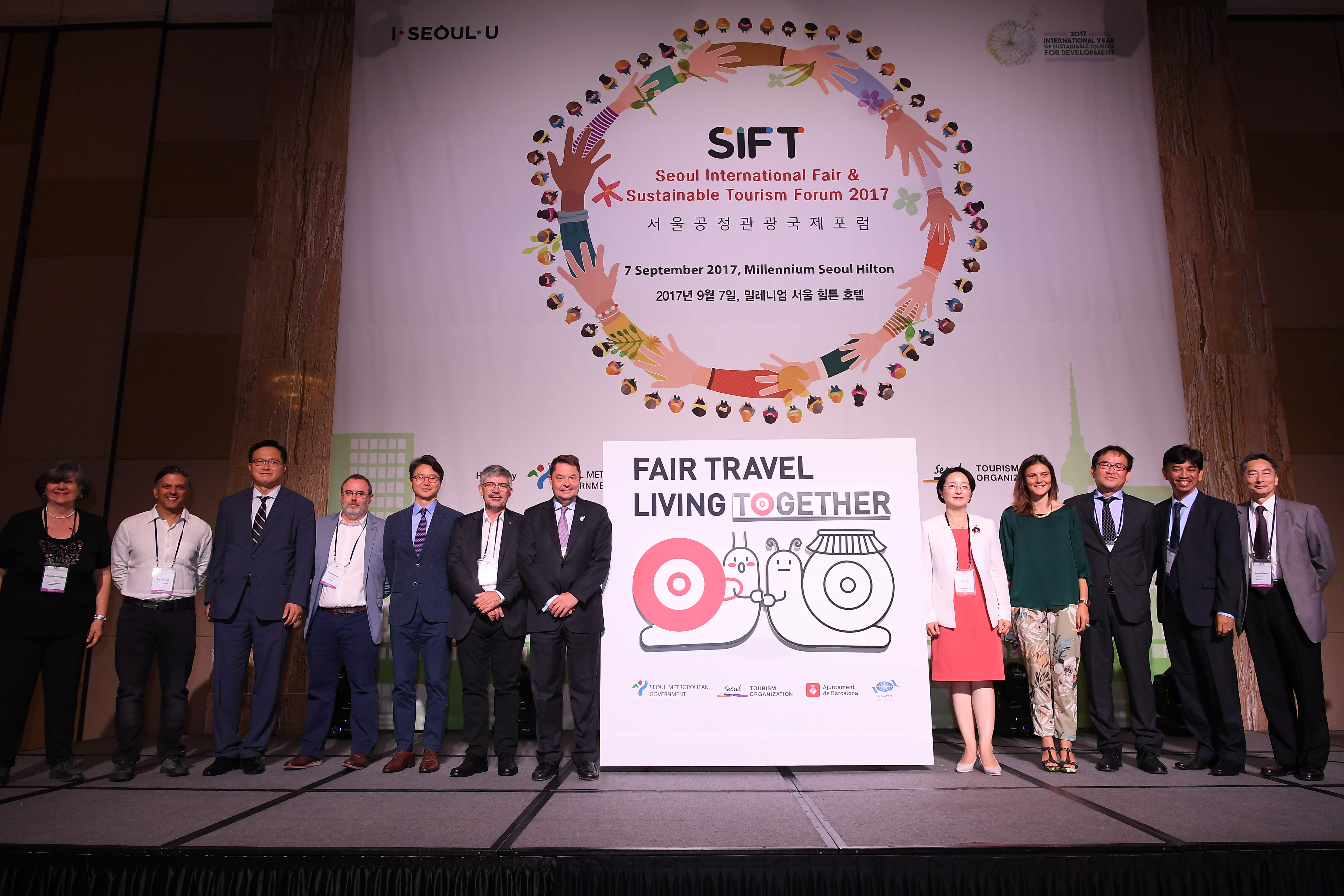 Posted at 21:09h in Uncategorized by Dayoong Kim

Joint session with UNWTO, Joint campaign and MOU with the city of Barcelona

Seoul hosted ‘Seoul International Fair & Sustainable Tourism Forum 2017(SIFT 2017)’ to foster fair and sustainable tourism. This forum opened under the theme of ‘New Urban Tourism: Fair & Sustainable City Agenda’ at the Millennium Seoul Hilton on 9.7(Thur). There were 300 invited guests, including UNWTO Executive Director for Member Relations, Councilor of Enterprise and Tourism at Barcelona City Council, Experts from Korea and abroad and citizens.

UNWTO designated 2017 as the “Year of Sustainable Tourism.” This will be the second time SIFT is held. SIFT is hosted by the Seoul Metropolitan Government, in collaboration with UNWTO and organized by Seoul Tourism Organization.

The total number of tourist grows 4~5% every year, accumulating to 1.235 billion in 2016, the equivalent of 10% of World GDP. Despite the industry’s accelerated growth, major cities in Europe (Barcelona, Venice, Amsterdam, etc.) are suffering from the large influx of tourists, such as the inflation of product prices and living costs and environment degradation. This discontent is also shown in the citizen’s demonstrations against touristification. 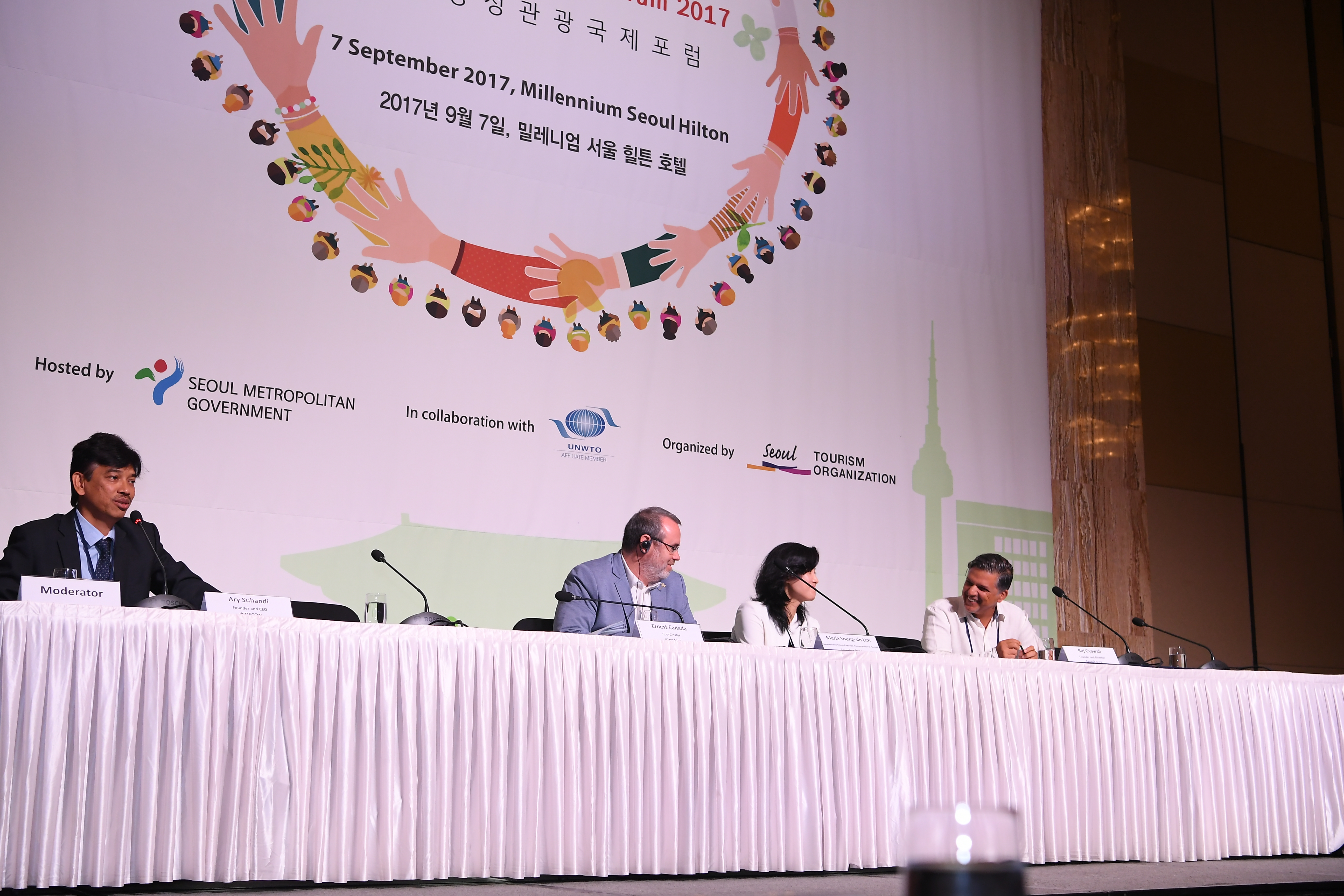 UNWTO states that the number of tourists around the world will increase 30% to 1 billion 235 million in 2016 from 950 million from 2010. In 2030, this will exceed 1.8 billion. In Seoul’s case, the growth has rather slowed due to tension due to the THAAD missile deployment and North Korea’s Nuclear testing, but touristification still prevails as a wide-spread problem in the metropolitan area. Citizens suffer from noise, litter, privacy violations, as residential areas are becoming tourist areas, such as Bukchon Hanok Village, Leehwa dong Mural Village.

SIFT is a platform for dialogue to ensure the co-existence of all parties: tourists, citizens, business owners, the environment and future generation.

Especially, during this SIFT’s Opening Ceremony, a Joint Campaign for Fair and Sustainable Tourism with UNWTO and the City of Barcelona was held. Seoul, UNWTO and Barcelona together adopted the “Fair Travel Living Together“ slogan and ”7 Proposals for a Fair Travel Citizen“ and carry them out. Seoul entered an MOU with Barcelona, a world example in sustainable tourism, and became close partners in advancing and spreading fair and sustainable tourism. 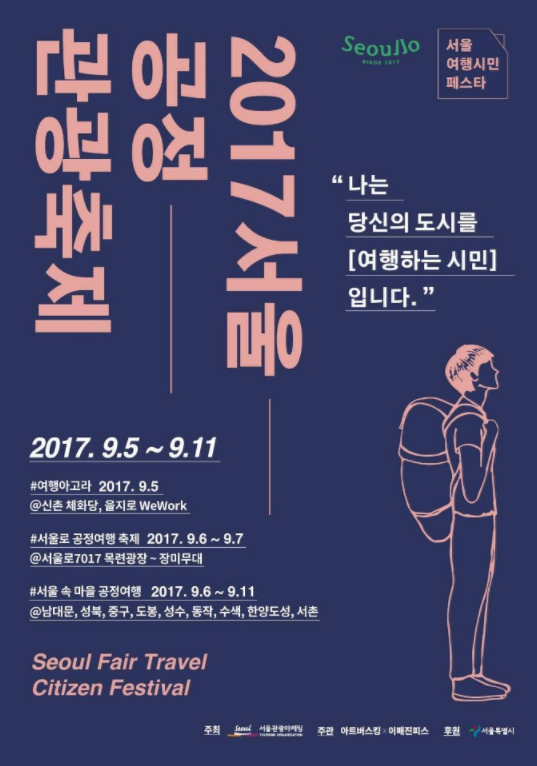 ‘2017 Seoul Fair Travel Citizen Festival’ was held in correlation to SIFT, and was a citizen-led event held at Seoullo7017 and various sites from September 5th (Tue) to 11th (Mon).

This festival was sponsored by Seoul Metropolitan Government, hosted by Seoul Tourism Organization and organized by “Fair Travel Citizen Social Network’s” ImaginePeace and ArtBusking and a total of 24 fair travel organizations were participating.

There are also programs held from 9.5(Tues) ~ 9.11(Mon) around various venues in Seoul: “9 Villages, 99 Stories,” a tour within Seoul, “Listen to the City,” a travel agora and “Himalayas, a Trip for Hope,” a fair travel cafe.

This festival is a voluntarily organized event by fair travel organizations that created the “Fair Travel Citizen Social Network” to change the social perception on tourism and create a new traveling culture together.