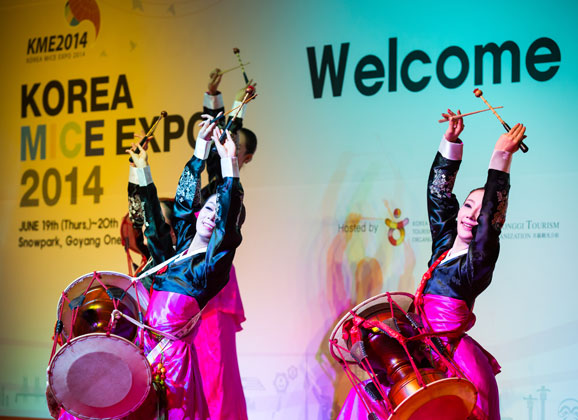 Posted at 08:45h in Uncategorized by Dayoong Kim

[dropcap]S[/dropcap]eoul recently took part in the 2014 Korea MICE Expo (KME), showcasing the city’s many and varied meetings offerings to the international business events community from June 19-20 at the KINTEX convention and exhibition center. Held annually, the KME is the nation’s largest meetings industry trade show which this year included a discussion forum, bidding clinic introduction session, and a buyers post-tour of Seoul.

At the exhibition hall, 350 buyers from home and abroad had the opportunity to meet with 200 exhibitors, including Seoul Tourism Organization staff and 45 members of its Seoul MICE Alliance, an industry partnership of the city’s main business events stakeholders at the 540m² Seoul booth. This is the largest turnout for the SMA – now comprised of 143 members – since the partnership formed in 2010.

The Seoul Tourism Organization held a presentation about their bidding clinic on June 19th. Already used by many organizations since it was set up, the clinic assists meeting planners, association leaders, and other event organizers who plan on bringing events to Seoul by helping them develop bid proposals, presentation skills, and overall bidding strategies.

The day also included an STO-hosted luncheon attended by 156 overseas buyers as well as domestic buyers and Seoul City officials. The luncheon was accompanied by a destination presentation on Seoul given by Seoul Convention Bureau Associate Director Maureen O’Crowley, who outlined the city’s many attractions to business visitors, in particular Seoul’s ancient and modern duality.

“Today’s Seoul remains an intriguing city of contrasts. Throughout, you will find the past and present blending in harmony – from the skyscrapers of the city center to the soaring tower of Namsan Mountain overlooking the majestic relics of the Joseon Dynasty,” said Ms. O’Crowley.

On Day 2, attendees learned of the competitiveness of Korean’s meetings industry at the K-MICE Forum, which was jointly-hosted by the Korea Tourism Organization and Gyeonggi Tourism Organization, with ICCA representatives invited to organize the event. The keynote speech for the forum was delivered by James Rees, Executive Director of ExCel London and member of the ICCA Board of Directors. Mr. Rees looked at the legacy opportunities the 2012 London Olympics provided the city’s meetings industry, a point echoed by Ms. O’Crowley later in her own presentation regarding similar benefits created by the 1988 Seoul Olympics, with the former event’s stadiums set to become a major part of the city’s meetings infrastructure by 2020.

Speaking during the afternoon’s ‘Ignite’ session, which invited five speakers to discuss the immediate and long-term social and economic impacts of the meetings industry, Ms. O’Crowley discussed the ways in which Seoul has achieved its current successes as a convention city. She also spoke of the city’s ongoing efforts to market Seoul creatively overseas and outlined the latest research findings, entitled “Beyond Tourism Benefits: Building International Profile” by the Future Convention Cities Initiative, of which Seoul is a member and chair.

Since 2000, the Korea MICE Expo has been Korea’s leading meetings industry trade show offering an opportunity for local and international business events professionals to showcase and discover the nation’s continually expanding events profile. The event, which periodically rotates between different Korean cities, was previously hosted in Seoul for three consecutive years and will be hosted in Gyeonggi again next year.