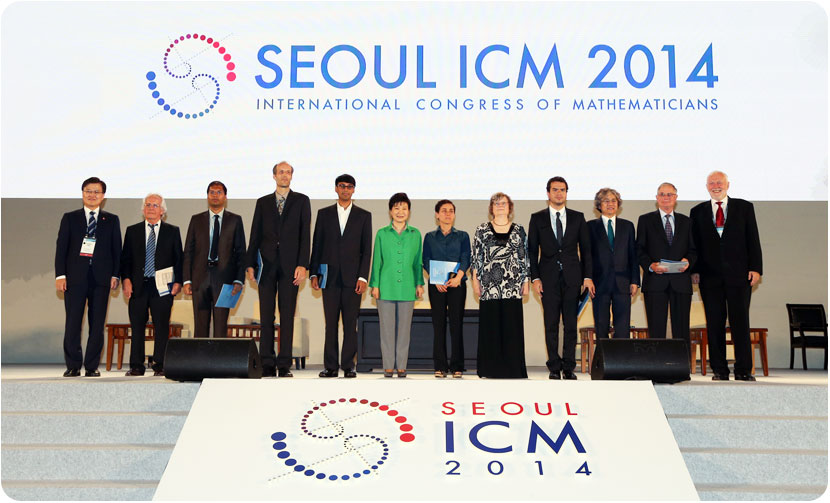 [dropcap]S[/dropcap]eoul recently had the opportunity to welcome a large assembly of the world’s top mathematicians in town for the 27th International Congress of Mathematics (ICM 2014), held at the Coex convention center from August 13-21. Over 5,000 people from more than 125 countries attended the successful nine-day event which featured a series of addresses from some two hundred invited speakers on recent developments in mathematics and its applications. The highlight of the event was the International Mathematical Union (IMU) ceremony for the Fields Medal, often regarded as the highest honor accorded to a mathematician.

Among this year’s Fields winners were Artur Avila, Manjul Bhargava, Martin Hairer, and Maryam Mirzakhani, the award’s first female recipient, all of whom were presented with their medals by South Korea President Park Geun-hye.

The Seoul Metropolitan Government provided full-fledged support for the congress, which included a conference dinner hosted by Mayor of Seoul Park Won-soon on August 16. Regarding the dinner, Assistant Manager Dohyun Kim of MECI International, which served as the official PCO for the congress, stated:

“The attendance of Mayor Park Won-soon at the Seoul-hosted banquet was a great welcoming gesture that left a deep impression on congress delegates, including International Mathematical Union President Ingrid Debauchies who gave special thanks to the mayor at the Farewell Dinner.” She also noted, “One of the highlights of the dinner, the live Taekwondo performance, was particularly well-received, as it was an exciting way for attendees to experience Korean culture.”

Seoul also provided ICM delegates with a complimentary “Seoul MICE Card”, which contained an electronically stored value of $5 for use on public transportation or at several convenience store chains. This was the first of several trials for the Seoul MICE Card initiative, which the Seoul Metropolitan Government has launched this year.

In addition, the city issued Seoul Welcome Kits to delegates, which contained souvenirs, promotional material, and a coupon book for key local businesses.

In between meetings, ICM attendees were able to experience Korean culture at a promotional booth operated by the Seoul Tourism Organization. The booth featured a hanbok (traditional Korean clothing) experience and photo zone, as well as themed postcards to mail back home.

ICM 2014 was organized by the Seoul ICM 2014 Organizing Committee in conjunction with the Korean Mathematical Society.

For more information about the many services and support available to international events hosted in Seoul, please visit the official Seoul Convention Bureau page at www.miceseoul.com or email mice@seoulwelcome.com.