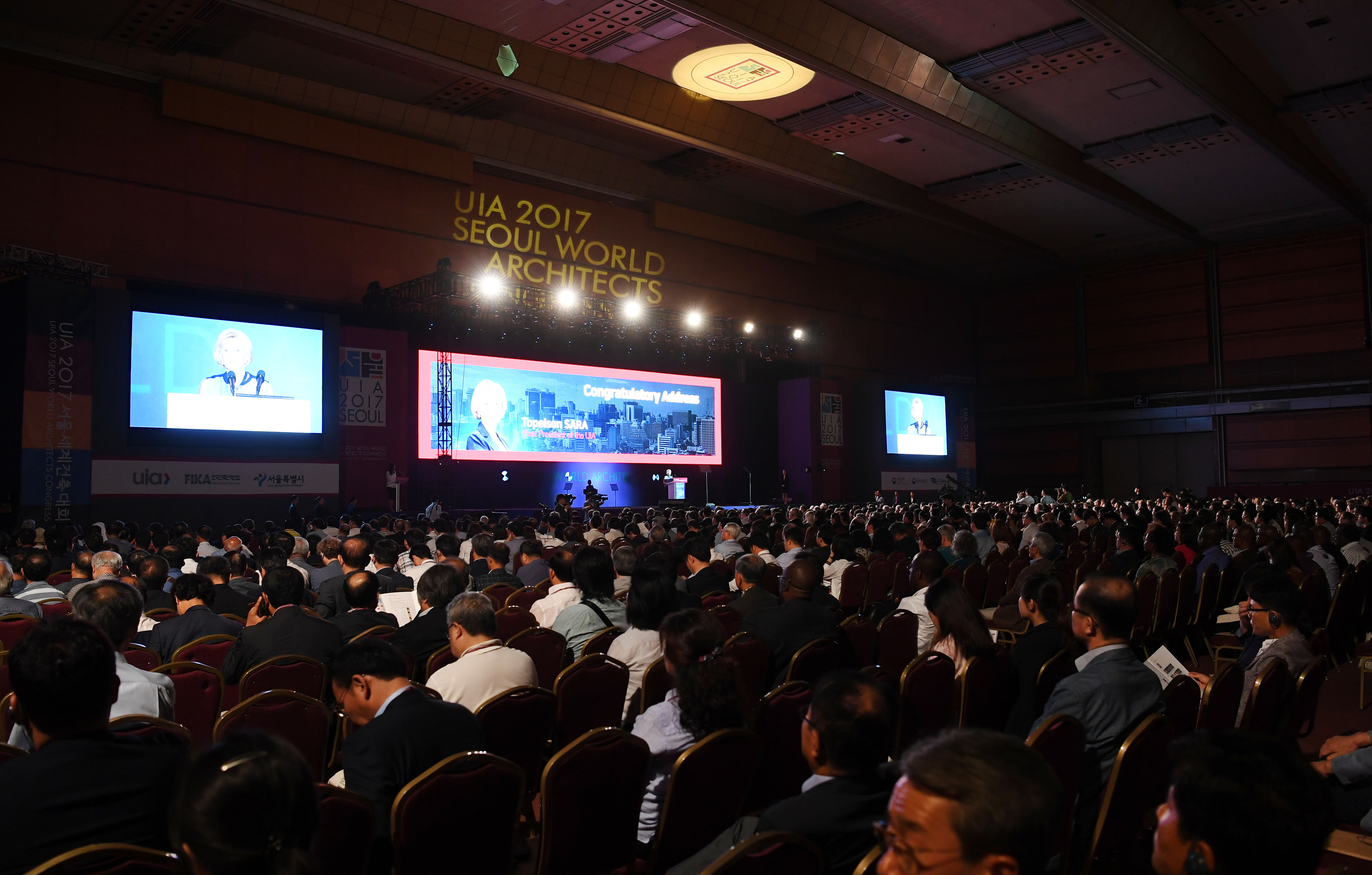 Posted at 21:05h in Uncategorized by Dayoong Kim

Showing Seoul as a ‘Soul of City’ to the World

Transitions from the Era of Construction to Architecture

“When we reminisce about culture in architecture, there is no city that can be compared to Seoul. This beautiful city, known for its culture, tradition, and design, has a very important meaning to architects worldwide.” (Esa Mohamed, President of the Union of International Architects)

Architect representatives from all over the world gathered in Seoul for this event. The ‘UIA 2017 Seoul World Architects Congress (UIA Seoul Congress)’ which is the world’s largest architectural event, also known as the Architecture Olympics, ended on the 10th this month with great success. Since 1948, the World Architects Congress has been hosted by the Union of International Architects (UIA) every 3 years and this was the first time it was held in Korea. The UIA is the only international architecture union recognized by the United Nations (UN) and it represents 1.3 million architectural firms from 124 countries.

The UIA Seoul Congress that was co-hosted by the Seoul Metropolitan Government and UIA & Federation of Institute of Korean Architects (FIKA) was held for the third time in Asia, as it was previously held in Beijing and Tokyo. In 2011, Seoul competed with Singapore and Mexico City and won the bid during the UIA Tokyo General Assembly. During this congress, they discuss recent architectural trends as well as international cooperation in architecture, residential environment, facilities, cities, preservation through academic, cultural, and political programs.

In this congress, architects from 124 countries gathered to explore the direction of architecture in urbanization with the theme of ‘Soul of City’ and shared the latest architectural trends. World-renowned architects such as Kuma Kengo, who designed the 2020 Tokyo Olympic Stadium, Patrik Schumacher, who participated in the design of Dongdaemun Design Plaza (DDP), Ito Toyo, who received the Nobel Prize in architectural design, and Dominique Perrault, who became famous in Korea for designing Ewha Womans University ECC Center gathered at this event making this an unprecedented celebration in the Korean architecture world.

The opening ceremony was held in COEX on the 4th this month. On this day, President Moon Jae-In expressed his thoughts in a congratulatory message, “Architecture is a culture that expresses our creativity and it is also a container that stores our thoughts and values to have a greater role than providing space. Recently, it fused with advanced technology, making our lives safer and more convenient.” Moreover, he mentioned the ‘Soul of City’ theme and said, “The city provides people with energy through its own vitality, but at the same time, it also alienates people. This is where an architect’s vocation and the government’s policy support are needed.” 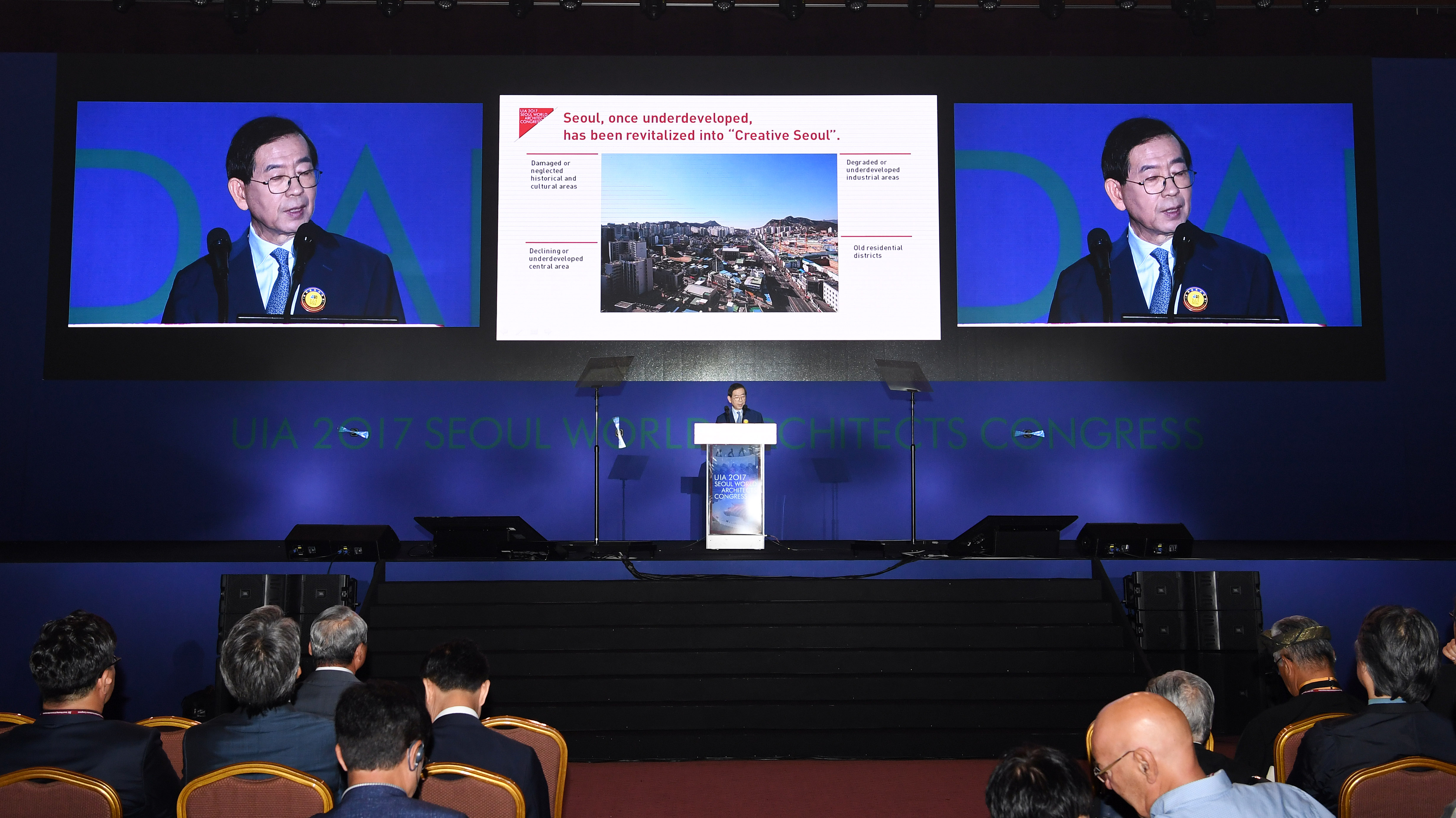 Mayor Park Won-Soon introduced the aspect of Seoul as an international city through his keynote speech. He said that Seoul has been ranked as the third largest MICE host in the world with more than 500 annual international conferences. Seoul, the world’s number one city for meetings and the world’s number one city in electronics, is home to more than 400,000 foreigners, making the world pay greater attention to the changes and innovations of Seoul. Seoul regeneration projects, such as Seoullo 7017 and Sewoon Shopping Mall, shows that if the past industrialization period was about demolition, reconstruction, and redevelopment, its focus is now shifting towards history, culture, nature, and most important, the people. Mayor Park Won-Soon stressed that Seoul is now trying to become a people-oriented city.

The key forum was based on 3 sub-themes: future, culture, and nature and during this forum, 12 Korean and foreign architects including Kuma Kengo, Seung Hyo-Sang, and Winy Maas, discussed the roles and leadership of architects. Patrick Schumacher, who participated in the architectural design of DDP, which became a landmark of Seoul and Cho Min-Suk, who received a Golden Lion at the Venice Biennale carried out public lectures on the 4th and 5th respectively for citizens and students who have a great passion for Architecture. Ito Toyo received the gold medal, the highest honor, at the awards ceremony on the 6th, when the UIA selected architects who had shown a global influence in various fields. This UIA Seoul Congress was held at COEX until the 7th. Then, it moved and ended in DDP by selecting the host city of UIA for 2023 through an UIA General Assembly.